Stay safe, Stay healthy, Stay beautiful | We are with you! Learn more to stay inspired

GET $20 OFF PER $100 FOR YOUR FIRST ORDERWORLDWIDE SAFE SHIPPING CONTINUES!| FREE US SHIPPING on orders over $89!
> Blog>Human Hair Wigs 101> Don't Fear A Bob - It just wants to make you look hot!

Don't Fear A Bob - It just wants to make you look hot!

A short bob style is super popular right now and will always be in trend. When having a long hair for a long time and people could get bored of all the maintaining it requires. They might want to chop off the long ratty hair and start fresh again.

Actually, the bob style has firstly gained its popularity in the 1920's. Nowadays, Hollywood stars continue to rock this look in a variety of styles, ranging from sleek, shiny to some casual curls.

Let's see how this bob style has developed to a fashion during the whole century.

Before the 1920's, women usually wear long hair to show beauty and femininity. They will be considered as rebellious and undesirable if they cut their hair to short. In order not to offend the men in her life, including her father, brother, husband and boss, they choose to keep the long hair.

In the early 1920's, two things has changed this and caused thousands of women worldwide to adopt a short hairstyle called ‘bob'. There is no doubt that this has also caused panic to men at that time. The first thing is that during World War II women had to work in factories and hospitals. Long hair makes it inconvenient while working and not hygienic as far as the medical work is concerned. The other thing was a ballroom dancer and actress named Irene Castle and she cut her hair to show how modern she was. This cut was so popular and it was named the ‘Castle Bob'. In no time, other celebrities followed her and cut into bob styles and it became a trend gradually.

Although newspapers, magazines and men express their strong voice that the style was not appealing and not fashionable at all, the convenience and easy to maintain advantages made the bob style thrive.

The bob style has been added in many different forms including flipped layers, longer length bob, wavy texture, etc. during this century. At the turn of the millennium, the bob trend continued to be strong and became more and more popular.

If you are worried that this bob style might not suit you and you don't have the courage to cut your hair, we got you covered. Our Pandora wig offers you limitless possibilities. You can add loose curls and trim it a little bit to make it your style in no time.

For your first order!
Sign up to get our latest news, hair advice and special offers. 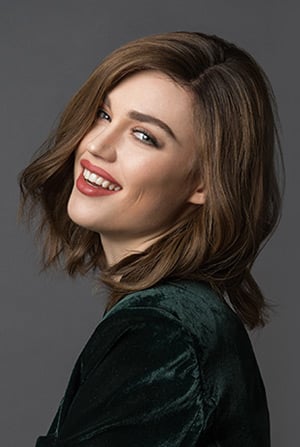